Pugs are beloved little dogs by many people all over the world.  Generally speaking, they are thought of as very docile dogs, and they’re not known for being particularly aggressive.

While it is true that pugs aren’t a particularly aggressive breed of dog, like any kind of dog, even cute little pugs have the capacity to be aggressive under the right circumstances.

Let’s dig a little deeper into why even docile breeds of dog such as pugs can develop aggressive behaviors.  We’ll look at how to stop the signs of aggression, and how you can stop it from happening.

When adopting a new dog, it’s very important to take into account whether or not the breed of dog is a good match for your family, lifestyle, interests, and personality.

Every breed of dog have their own set of characteristics that determine their overall temperament.  Some breeds of dog are more prone to aggressive behavior than others.

There are many external factors that may induce aggressive behavior in even the most docile breeds of dogs.  We’ll explore this further, but first we will discuss the temperament of pugs more generally.

Pugs are, typically, very loyal and affectionate dogs to their owners.  Additionally, they’re known for being quite silly and playful dogs.  Despite their silliness, they are more intelligent than you might think.

This intelligence can lead to mischievous behavior, and sometimes they can be overtly headstrong, particularly during training.

Since pugs are quite small dogs, they were bred originally to be lap dogs.  Because of this, many pugs want to be close to their owners constantly, and many pugs are very affectionate towards their owners.

Although pugs, for the most part, are friendly and docile dogs, they can be aggressive if not socialized properly. This aggressive behavior can show itself through growling, biting, lunging, and barking.

The main cause of this kind of behavior is the establishment of dominance when in a place in which they feel is their territory.

Other times, this aggressive behavior manifests itself when the pug is fearful.  If the pug is not well socialized with people or other dogs, they can misbehave in these sorts of ways.  Their fear and anxiety cause them to lash out aggressively.

There are many other triggers that could potentially cause a pug to act out aggressively. Certain situations may cause anxiety and aggression in a pug, such as being left alone.

Oftentimes pugs will act aggressively after being left alone for a while in order to demonstrate their unhappiness towards the situation.

What Causes Aggression In Pugs? 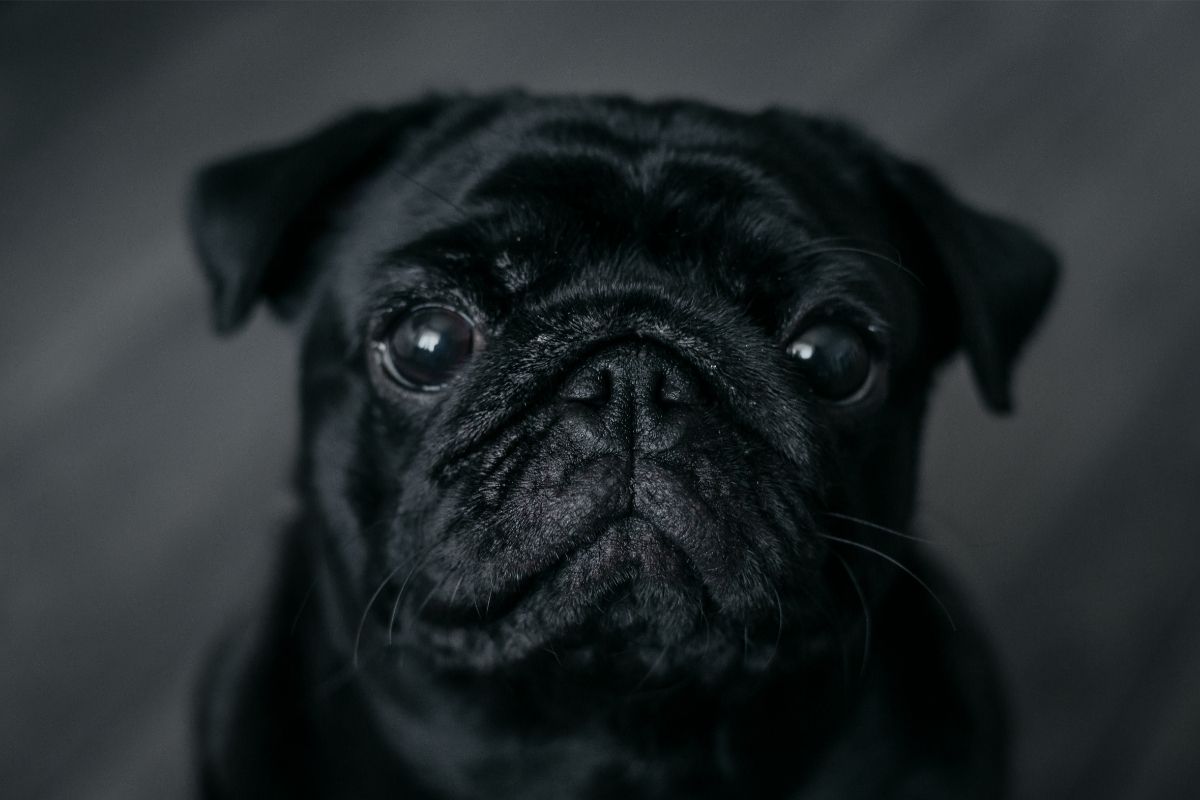 Aggressive behavior can be caused by many different factors, including their genetics, raining, socialization, and their environment. Aggressive tendencies can be passed down from a parent pug to their puppy. The most common cause of aggression in pugs, however, is poor socialization and training.

It’s important to consider that getting a dog is a large commitment as they need proper attention, training, and socialization.

To raise a well behaved dog, it requires years of dedication and sufficient time to teach the dog how to respond appropriately to people and other dogs.

Pugs who have been victims of animal abuse are far more likely to develop aggressive behavior. Additionally, if they grew up in a high stress environment, or they were exposed to trauma from a young age, this is likely to lead to misbehavior and aggression.

If pugs have a negative experience as a puppy, this can have a lasting impression on their development and overall temperament.

This could happen if the puppy is introduced to an older dog who attacks or simply plays too roughly with them. This may cause the puppy to grow up reacting aggressively towards other dogs.

How To Prevent Aggression In Pugs

Just like any breed of dog, even the commonly docile pug can learn to behave aggressively.  But similarly, they can also be trained to not exhibit these sorts of behaviors.

It’s incredibly important to maintain good training habits and socialization throughout the pug’s whole life, not just in their early stages.

Your dog looks to you for guidance as to how to react to other people, dogs, and their environment.

It’s essential that you expose your dog to various stimuli such as other dogs, people, children, noisy environments, so that they can learn that they don’t have to behave aggressively in environments where they feel anxious.

When you take your pug out of their comfort zone, and they exhibit aggressive behavior, you can correct their behavior and teach them to react differently.

Keep in mind that genetics also play a large role in a dog’s behavior.  Before you choose a puppy to adopt, it’s a good idea to meet the puppy’s parents when possible.

This will give you a good idea of their personalities and temperaments. By doing this, it will help you to decide whether or not the puppy will be a good match for your lifestyle and your family.

Generally speaking, pugs are kind, affectionate, and loyal dogs.  They are not known as being an aggressive breed, but like any type of dog, they can learn to exhibit aggressive behavior if they feel anxious or afraid.  They are known, however, for their stubborn, headstrong temperaments.

This is why they require dedicated training and socialization so that they can behave appropriately around other dogs, children, and people.

Pugs make great pets thanks to their playful nature and cheerful demeanor.  Many pug owners describe their pugs as “naturally comical” and “laid back”.

They tend to love napping, playing, and just lounging around. Despite their good nature, they do require a lot of dedicated obedience training to keep them on track.

There’s plenty to love about pugs, and we hope that this article will help you maintain your pugs good behavior and prevent any aggressive tendencies from developing.

Remember, dedicated training and socialization is key, not just with pugs, but with any breed of dog.